ENGLISH:
The daily newspaper "Politika" published an article by Sandra Gucijan about our aces  project  and award for special achievements in the field of innovative learning, which our school has received, in the rubric "Society",  on 17 April 2013.
We are grateful to the editorial staff of "Politika"  newspaper for giving us the permission to publish this article on our blog.

Another international award for a school from Serbia

School for hearing impaired "Stefan Decanski"  from Belgrade is the winner of the Academy of Central European Schools (ACES) award for innovative cross-border project on media literacy.
The award was presented at a ceremony in the Slovak town of Senec, from  9 to 12 April, with the participation of 230 students and teachers, as well as representatives of the ministries of
education from 15 countries.
The aim of the Serbian award-winning projects, which was produced with partner school "Constantin Păunescu" from Romania, is to raise awareness on the problems of children with special needs.
Serbia has been a part of the cross-border network of schools since 2007. Competitions for school projects are published every year, and so far 37 schools from Serbia have participated in ACES. This year's project involved more than 400 schools from the region, and of these, 107 schools received the grant, and the International jury awarded the five best projects.
New ACES Contest on  the theme"I and others: Discovering diversity in and  around me" is still open. Schools in Serbia can submit their project proposals until 30 April, and students can foundmore information at www.aces.or.at. ACES  Network  was founded by Erste Foundation in 2006. Today. 15 countries are members of the network.
S. G 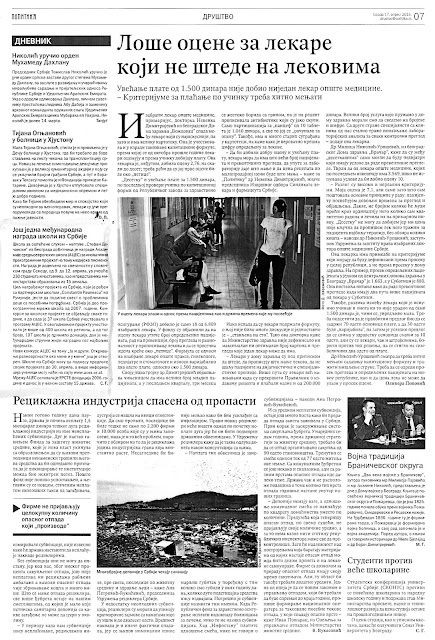 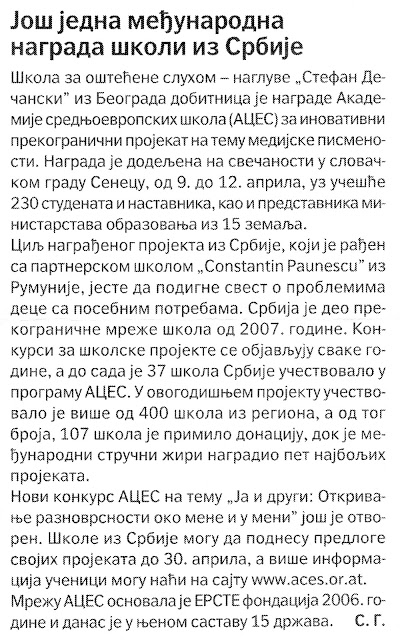 Thank you for reading and commenting, we are waiting for you to come back and visit us soon!

Project awarded for special achievements in the field of innovative learning

We teleport you to Edutopia

Our aces friends are online!